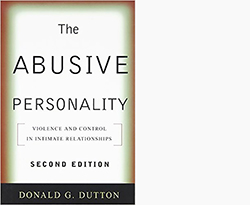 This is an exemplary book, every step of the way: rich in information, scrupulous in its methodology and clarity of concepts, uncompromising yet tactful in its critical review of earlier hypothesis, and an engaging, articulate read on a vitally important subject.

Intimate partner violence, a topic that was avoided until the last quarter-century, is a confounding subject and much more complex than earlier approaches (social and academic psychology, personality theories, or early psychiatry) presented it. Although he describes 3 main abuse perpetrator subgroups, the author’s focus is on the cyclical/volatile/borderline character type.

Unfortunately, none of the above truly explains the cyclical and explosive nature of real-life battering. The author is drawing from a vast range of data that describes the cycle: the bulk of the credit here goes to David Celani’s object relations classic, The Illusion of Love (Columbia University Press, 1994). At the same time, using analyzed victim testimonials, psychological studies of deindividuated violence, cycles of dysthymia and ruminations, and analysis of borderline personality, the author builds his case demonstrating the strong correlation between the personality structure of the cyclical abuser and that of the borderline.

Their similar scoring on Oldham’s BPO scale (measuring identity diffusion, vulnerable reality testing, and use of primitive defences) is rooted in severe early trauma. The seemingly disparate threads from psychoanalysis (Mahler, Klein), developmental psychopathology (attachment theory), and sociopsychoneurobiology (Siegel, Schore) are woven into the dynamic tapestry of self-development as the author describes the particular constellation of early traumas (insecure attachment, rejection, shaming) that is conducive to the development of abusive personalities, regardless of sex or sexual orientation. Although the abuser’s pathological schemas were etched into the (right) brain very early, the author offers practical, integrative approaches to therapy.

The importance of this study extends beyond the care of the severe abuser. Its insight applies to patient care whenever issues of attachment pathology, shame, and anger are of concern. One sincerely hopes that its depth of understanding and freedom from political agendas herald a new era of psychiatric research.